There Is No Shelf Life When It Comes To Your Dreams

On a whim, I decided to fill in a casting application today, and one of the sections asked for a “personal bio” (not a “professional bio”) where you get to talk about yourself, your goals, yours regrets etc. After some pondering, this is what came out.

If there’s one thing I’d hope my life would be a testament to, it is this – that there is no shelf life when it comes to your dreams.

To be sure, there are various levels of “success”, and it’ll be presumptuous of me to think that what I’ve been able to achieve thus far in the music industry might serve as an inspiration to anyone.

But I grew up in the Philippines listening to the likes of James Ingram, Michael Jackson, Kenny Loggins, and watching telecasts of the Grammy® awards, never imagining that one day, I’d become a NARAS member myself, and be a  part of “Music’s Biggest Night” as a music creator, much less get recognition as a producer on 2 Grammy®-winning jazz albums (by Ted Nash in 2016, and by Arturo O’Farrill and Chucho Valdes in 2017.) 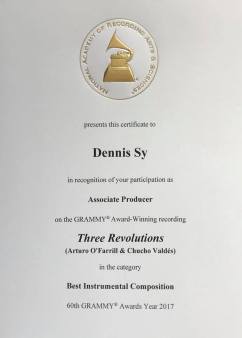 All while hustling day to day on a 9-5 job as an IT professional for a major bank on Wall St., and giving in to the call of the arts at night and during the weekends in the pursuit of music as a songwriter and as a singer and performer.

I wish I could say that everything that has happened on this journey was as a result of a conscious design, or careful strategic planning. On the contrary, most of what I thought of as set goals didn’t really materialize in the form of what was originally intended. I realized that dreams have a way of manifesting themselves in ways that you’ve never envisioned, but in alignment to what you have shared with the universe.

And what I have set out to share was my art – thoughts and aspirations and day to day yearnings and views as interpreted through words and music.

It’s easy to call it quits if dreams are based on myopic visions of what success should look like. But when dreams are based on one’s passion, and when the underlying reason for its pursuit is a desire to share something to the world with the intent of trying to make a difference in a positive way, then there is truly no shelf life to what you can conceive in your mind and in your heart.